In Praise of Scrapers 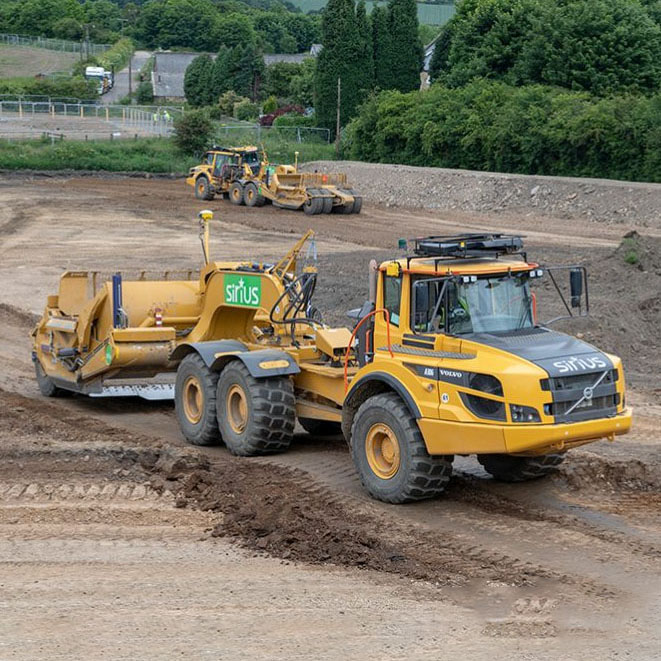 In Praise of
K-Tec Scrapers

You don’t see so many motor scrapers around these days, but if Leeds-based Sirius Group is right, they are poised for a comeback

Since their heyday in the 1970s, motor scrapers have slowly disappeared from the UK to be replaced by articulated dump trucks (ADTs) and excavators. The once-ubiquitous behemoths were to be seen on every opencast and road job and were considered to be the quickest and most cost-effective way of moving spoil from A to B.

In recent years, however, motor scrapers have all but disappeared from civil engineering sites and, while there are still a handful of older examples operating on smaller projects, the majority are confined to power station coal stockpiles.

Motor scrapers are expensive machines but they have just one use; both excavators and ADTs can carry out a variety of tasks, making them more cost-effective on all but the largest earthmoving projects.

A compromise that is still employed to some extent is the towed scraper box – forerunner of the motor scraper – which offers a cheaper option when used in partnership with a tractor or dozer.

But now there is talk of large scrapers making a comeback for HS2, where vast quantities of material will have to be moved.

One company that is seriously looking at replacing the excavator/ADT combination with big motor scrapers is Leeds-based civil engineering contractor Sirius Group.

Plant director Stuart Kirk explains the reasons for the rethink:

“I come from the age of scraper operations and spent many years working with one of the biggest names in scrapers [muckshifting specialist contractor] Neil Becher. I know first-hand that scrapers can be the most efficient and fastest way of moving muck and wanted to look at something similar to this that could help our company,” he says.

“We have used subbies with towed boxes in the past and they have done a great job, but they’re only able to do one job – move muck,” adds Kirk. “We wanted to take that solution and better it.”

“Once I saw what the K-Tec machine was capable of, it was a done deal as far as I was concerned,” says Kirk, “but I had yet to explain my decision to the board and then convince them it was the right way to go. Fortunately, they accepted my proposal and we made contact with K-Tec’s team.”

The K-Tec product range includes large-scale scraper bodies designed to be pulled by an ADT front-end. Kirk’s idea was to combine the K-Tec scrapers with converted ADTs of which Sirius has plenty of experience in operating. “The thinking of using a converted truck was that, should the scraper work drop off or conditions become too bad to operate with the ADT front-end, we could put the bodies back on while still under a full shift,” he explains.

Kirk took a pair of Volvo A30G trucks off frontline hauling duties to be converted by the K-Tec team. “They’re built well, are reliable and in the A30G we have a fuel-efficient tractor capable of coping with the K-Tec box and still giving us good fuel returns,” he says.

“What we were really looking for was a modern combination capable of moving material quickly, economically and in large amounts whilst still keeping to our company ethos of supplying environmentally friendly solutions.”

K-Tec has no UK dealer, so the team from Canada worked with SMT, Volvo’s UK distributor, to carry out the ADT conversion. Once the body and hoist cylinders were removed, it was a straightforward affair, says Kirk. “We’ve been refining the set-up since it first went into operation,” he adds. “We believe we now operate one of the quickest, most efficient, cleanest and economical methods of muck-shifting in Europe.”

With additional wings added over the rear axles and the fifth wheel bolted into position, the relevant hydraulic supplies were lengthened to support the hydraulic system on the box and an excavator-style joystick replaced the dump lever inside the cab. The multi-function joystick allows control over the raising and lowering of the scraper’s bowl, opening and closing of the apron as well as the actuation of the ejector plate.

With the scraper and ADT combination set up, the next task was to install a Trimble 3D GCS9000 grade-control system. Sirius already operates 20 Trimble units in its dozer fleet and more recently has equipped several excavators with the system.

“We wouldn’t look at a job without it being undertaken on GPS these days,” says Kirk. “The accuracy and speed at which we can undertake a project is amazing. We no longer move too much or too little material and not having a surveyor on the ground makes the job so much safer.”

The addition of the machine control system now allows the scraper to be set into automatic mode to remove just the required amount of material each time and dump it in an accurate layer where needed. “For a cut-and-fill project, it is simply unbeatable,” says Kirk.

The A30G’s D11E diesel engine delivers 320hp at 2,100rpm, which is ideal for hauling the 21.4m3 capacity K-Tec 1228 box. Apart from the removal of the skip and the addition of the gooseneck coupling, there were very few changes made to the truck externally, says Kirk.

Inside the cab there have been numerous additions along with the joystick control lever. To the operator’s right-hand side is a trio of screens. The lower of these is the control screen for the scraper box and allows the operator to set parameters for the box manually.

The centre screen contains the brains for the Trimble system and shows the operator a real-time view of exactly where and what the outfit is doing. The top screen is linked to a colour wide-angle rear-view camera mounted on the chassis and shows the apron of the scraper, whilst an identical screen to the left hand side of the cab shows an in-bowl view.

The positioning of the screens and the Volvo’s large mirrors mean the operator very rarely needs to take a look over his shoulder at what is going on behind.

Operator Ian Hagler praises the combination for its performance: “We’ve run it on top soils and hard, compacted, former colliery overburden and it performs very well. You have to be very careful and not be too greedy as it will make the wheels spin but with a shove from the blade, you soon get moving again. I was a bit wary about operating the combination at first but after a couple of days, it became second nature and is very easy and comfortable to operate.”

Kirk say that the production figures already far exceed his expectations and estimates that it would take a trio of 35-tonne ADTs, a 45-tonne excavator and a dozer to do the same work as one of his scrapers.

“The trucks do use a little more fuel than they normally would but they are carrying over 40 tonnes at a time. This equates to over a 40% increase in material moved every time the truck moves. We couldn’t be more pleased with this result.”