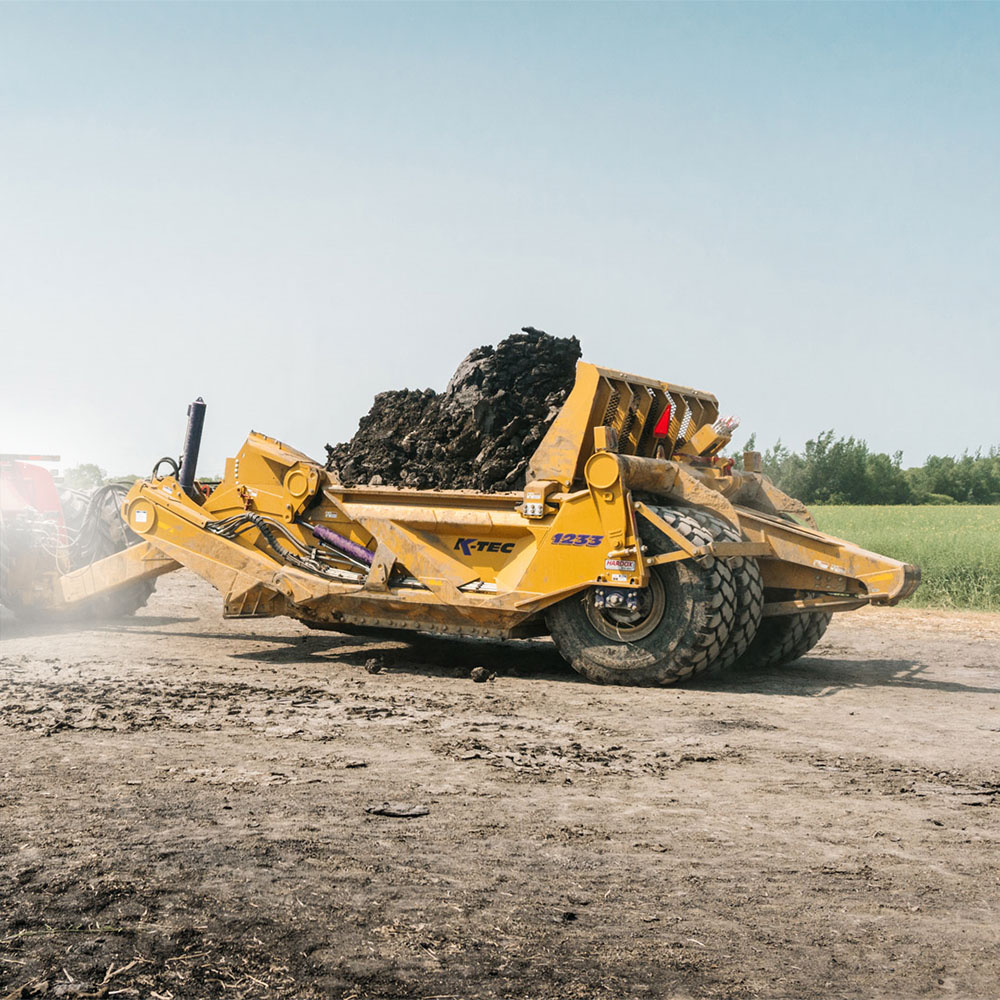 Since its inception in 2000, the K-Tec scraper has always been designed as a technologically advanced, pull-pan scraper machine. K-Tec has spent years of research and development in refining an optimal self-loading scraper. The resulting cutting-edge angle & configuration, along with bowl dimensions attribute to advantageous self-loading. These factors allow K-Tec scrapers to maximize the horsepower provided by the power-unit to efficiently self-load the high-capacity scraper bowl between 30-50 seconds in the cut zone.

All K-Tec scrapers have the 3 core technologies built in: Load-Tec, Tensile-Tec, & Lube-Tec. Load-Tec involves K-Tec’s hitching system which distributes load weight to maximize the pulling unit’s power while minimizing stress on the hitching tongue. With most of our earthmovers, 75% of the weight is transferred to the scraper’s axles, placing less stress on the tractor’s rear axle. Our Load-Tec system also works to achieve equal pull between the front and rear axle of the tractor. This balancing of the tractor is achieved by adding weight to the front of the tractor, which minimizes the stress placed on the rear axle. For the ADT series, we’ve developed a gooseneck hitch pole, and quick attach hook up so that 30% of the scraper’s load weight is transferred directly to the point where the truck is designed to carry weight.Tensile-Tec refers to the high-tensile steel plating strategically designed through years of field trials and materials performance analysis. This has enabled K-Tec to develop manufacturing and reinforcing techniques that make for the most durable pan scraper available. Reinforcement with high tensile wear and structural steel in critical stress areas has established stress standards between 150,000 to 200,000 PSI, which is significantly greater than many other scrapers on the market using traditional steel ranging between 40,000 to 60,000 PSI. This allows for K-Tec to use less steel, while still being constructed as a scraper of superior structural strength.Lube-Tec refers to minimal, simple, one-minute grease points. While other scrapers available in the market may require 12-30 grease points to be serviced twice daily, K-Tec earthmovers can be serviced in only minutes per day. K-Tec scrapers have only two easy-access grease points that require servicing once a day, while the other four rear axle grease points, only require greasing every quarter (500 hours) on new scraper models. Greaseless bushings on all other hinge points can run up to 1200 hours before needing to be replaced. These technological advancements allow labour hours to be dedicated to productively moving material, instead of idle maintenance.

K-Tec’s technological scraper advancements have been to the benefit of scraper operators. K-Tec has recognized that it has been hard for contractors to find qualified scraper operators, as traditionally, the position was a complex task, and was ergonomically uncomfortable having to twist and bounce in the cab.

In 2008, K-Tec revolutionized the scraper market by releasing the first-ever ADT Scraper concept at ConExpo. K-Tec was the pioneer to develop the technology of hooking-up an articulated dump truck to a scraper and is currently celebrating the 10-year anniversary of the ADT scraper in 2018. It is a massive advantage for a contractor to be able to use an existing fleet of ADT’s and convert them into efficient, self-loading scraper haulers. Not only can the trucks be utilized for a new purpose, but also that same truck driver can now easily transition into an effective scraper operator, behind the same familiar wheel.

The great operator benefit with using an ADT as the scraper power-unit, is that using a scraper is now a comfortable, forward-facing operation. The truck’s 6-Wheel Drive, along with K-Tec’s Scraper Automatic

Cushion Ride System, enacting as a shock absorber, provides for a smooth ride for the operator, plus the ability to travel faster on the haul road for increased productivity.

With K-Tec’s ADT Scraper system, the operator’s eyes can always be facing forward by using the truck’s factory back-up camera that is angle adjusted towards the cutting edge to see the material flow smoothly into the bowl. K-Tec provides additional camera kit options for split screen view of the top of the heap, or scrapers in tandem configuration.

K-Tec’s ergonomic padded armrest and multi-function joystick control are attached to the truck’s operator seat. Younger millennial operators have a natural comfort with video-game joystick controls, allowing for ease of training. An operating system display in the cab provides the operator with a selection of automatic ejector modes for specific soil types and an even spread of material for excellent compaction. The variety of pre-programmed ejector modes also allows for simplistic training of new operators. The operating system also displays automated load counting productivity and operator service maintenance reminders. The reminder alerts will pop-up to have them confirm completion on the scheduled intervals that the operator/service mechanic are supposed to perform a task. Examples range from daily greasing, to tire pressure and cutting-edge checks, to ensure maximum performance of the machine.

Further precision technology can be easily added to the operator’s dashboard, as K-Tec scrapers come Trimble GPS-ready from the factory. This allows for Trimble’s kit to be simply installed for quick GPS integration for finish grading applications. K-Tec’s pull-grader land leveler units can bring an earthmoving jobsite to the final grade as well as maintaining haul roads.

K-Tec is an ideal provider for earthmoving scrapers and land levelers, as the company has a dedicated focus on these products. K-Tec’s investments into research and development spending in the continual advancements of technology, provide for an advantage for a wide-variety of contractors and jobsite applications. The future of K-Tec earthmoving products, currently being planned will continue K-Tec’s reputation as a trailblazer in the scraper industry.