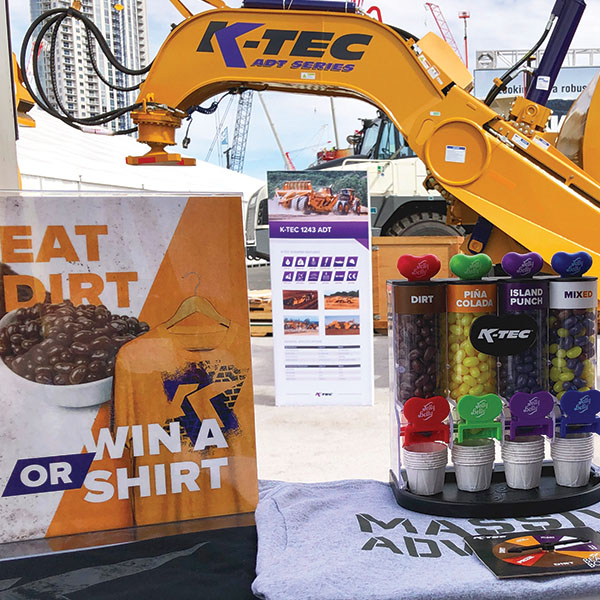 Some marketers maintain that small equals insignificant. Whenever their programs don’t rake in returns, they cite budget shortfalls, limited awareness, and colossal competitors with pockets deeper than the Mariana Trench. But if you’ve ever had a pebble in your shoe or a sliver in your finger, you know that petite doesn’t necessarily equate to paltry. Actually, it’s often the smart mini maneuvers – those born of concentrated, audience-centric concepts rather than over-the-top stunts and crazy cash outlays – that deliver radical results.

Marketers at K-Tec Earthmovers Inc. have mastered the art of the mini maneuver. At ConExpo-Con/Agg 2020, the provider of earth-moving scrapers and accessories employed a clever, pint-sized promotion and walked away with more than a 100-percent return on investment and a Sizzle Award to boot.

These massive results, however, were no small feat considering the show environment and K-Tec’s position within it. Held once every three years in Las Vegas, the construction-industry event offers roughly 2.7 million net square feet of floor space and attracts more than 2,200 exhibitors.

While K-Tec sinks the majority of its marketing budget into this one event, and its equipment isn’t mini by any means, as some models measure 14-by-44 feet and weigh more than 30 tons, the firm still isn’t a big fish in this massive pond. Compared to some of the show’s whales, you might call it more of a midsized mackerel. That’s because K-Tec, which didn’t enter full-scale production until 2004, is relatively new to the market. Plus, it’s a short-line equipment manufacturer (i.e., a specialized attachment supplier as opposed to a full-range provider), which means the bulk of its products need other companies’ tractors, trucks, or power units to operate them. As a result, despite K-Tec’s potential product superiority, attendees often beeline to more universally appealing power-unit products offered by historic brands such as Caterpillar, Volvo, and Liebherr.

Bottom line: K-Tec is a lesser-known firm with fewer offerings. Unless its marketers craft a compelling reason for attendees to seek out the exhibit, the operators, contractors, and construction-company CFOs the firm hopes to reach will generally gravitate toward historic brands with soup-to-nuts solutions.

Potholes and Detours
K-Tec’s challenges, along with its own expectations, didn’t stop there. In addition to scraping out some visibility amid this concrete jungle, Shane Kroeker, K-Tec’s director of strategic initiatives, also wanted to increase booth traffic, dwell time, and the number of quality leads compared to the 2017 show. Plus, he set a seemingly insurmountable goal: To drive awareness and booth visitors, he wanted K-Tec to rank in the top 10 out of 2,257 exhibits for most page views on the show’s website. Thanks to the event’s rigorous measurement mechanisms and trackable attendee badges, it provides exhibitors with live updates on their performance regarding everything from page views and exhibit dwell times to nearby aisle traffic and booth visitors. So to best position his booth for success, Kroeker wanted K-Tec to hit the top 10 in page performance before the show opened.

Attendees flocked to the Beanboozled Challenge, where a spin of the prize wheel determined whether they’d eat dirt-flavored jelly beans, consume fruity varieties, or win a branded T-shirt.

What’s more, the firm’s marketers faced a sizeable hurdle thanks to a show-management detour. “For the 2020 show, a large portion of the Las Vegas Convention Center’s outdoor exhibit area was closed for construction,” Kroeker says. “So exhibitors typically housed next to the LVCC were relocated to what management called the Festival Grounds, which was nearly two miles away and on the other side of Las Vegas Boulevard.”

Going into the 2020 show, then, Kroeker needed to unearth a killer – and relatively inexpensive – traffic and awareness generator for his stand. It had to be interesting or noteworthy or even goofy enough to build buzz that would rival competitors’ commotion and lead people to the K-Tec space in the show’s back 40. The key to building serious noise, Kroeker surmised, was to appeal to attendees’ senses, create a space in which they felt comfortable, and sprinkle in a little bit of humor to really ratchet up the allure. “We wanted to foster awareness and drive meaningful selling conversations in the booth,” he says. “We felt the best way to engage attendees was to develop an environment that felt familiar – one that subtly influenced their senses and that included some fun.”

Kroeker and his team concluded that when you’re dealing with earth-moving professionals, nothing says “familiar” and “fun” better than dirt. Hence, they devised a multipronged traffic-building tactic that cleverly and subtly employed the five senses while keying in on the smell – and taste – of good ol’ fashioned soil.

Sensory Solutions
While K-Tec’s traffic builder would incorporate all the senses, Kroeker’s team decided that the main promotional and comic component would be a taste-centric activity involving jelly beans, aptly named the Beanboozled Challenge. Located at a central reception desk within the company’s 100-by-100-foot outdoor footprint, the game would feature a prize wheel whose slots represented both rewards and punishments.

With this central concept identified, the team devised the slogan “Eat dirt or win a shirt.” And while K-Tec’s pre-show promotional efforts actually launched almost a year out via the company’s social-media posts and newsletter blurbs, a few weeks before the show doors swung wide, the firm issued a series of tweets featuring the slogan and pushing viewers to K-Tec’s page on the ConExpo-Con/Agg website. In addition, Kroeker purchased a promotional sponsorship to raise visibility that included everything from a half-page ad in the show’s map book to an optimization package on the online directory. As a result of these pre-show efforts, the firm ranked No. 10 out of 2,257 exhibitors when the show opened on March 10, 2020.

Building off this momentum, marketers maintained their social-media efforts at the show and blasted out tweets – most of which referenced the “Eat dirt or win a shirt” slogan or the Beanboozled Challenge – once every 60 minutes. Not surprisingly, a considerable percentage of booth visitors turned up because of the pre- and at-show social-media campaign. However, Kroeker also employed another sensory tactic to lure in those passersby who might have missed the promotions: diffusers pumping out the aroma of fresh-turned dirt. “Many people merely walking by caught a whiff of the scent, glanced over at our booth, and then headed toward the busy line at the Beanboozled Challenge,” Kroeker says.

Positioned near the center of the space and under one corner of an enclosed 30-by-50-foot tent, the jelly-bean-and-T-shirt activity drew a near-constant crowd throughout the event. “After we scanned their badges at the desk, attendees took turns at the wheel, hoping against hope that they didn’t have to ‘eat dirt,'” Kroeker says. In fact, to prompt T-shirt lovers to play the game, K-Tec also sold the branded shirts, which featured its logo. So the chance to win a $15 T-shirt outweighed the risk of “eating dirt.”

Whereas the Beanboozled challenge and the diffusers checked the sensory boxes for smell and taste, K-Tec addressed other senses a bit more subtly, though not less effectively. To create an environment that both looked and sounded like attendees’ job sites, it partnered with two truck and tractor firms to borrow some of their power equipment and attach them to its scrapers in the booth. While Kroeker had previously used this strategy to create a visual illustration as to the type and size of vehicles necessary to operate the scrapers, this year staff literally turned up the volume. Once every hour staffers hopped into the cabs and revved their engines, creating a couldn’t-miss ruckus that brought attendees running.

Kroeker also employed a video wall and a virtual-reality activity to stimulate attendees’ sense of sight. Positioned near the jelly-bean station, the 6-by-12-foot video wall depicted K-Tec’s equipment in action. Meanwhile, a VR activation in one of the truck cabs allowed participants to ride along on a road-scraping experience with the company’s founder. And to employ the sense of touch, staffers used a far more understated approach. Throughout the space, they routinely suggested attendees touch and feel the tires, manipulate the controls, and get hands on with the products.

Small Tactics, Big Results
All told, K-Tec spent less than $44,000 on its sensory traffic builders and social-media tactics (including everything from the T-shirts and video wall to the sponsorship and VR activation). While utterly unforced and almost imperceptible to attendees, the sensory activities lured in visitors and created a place where they felt at home – a factor Sizzle Awards jurors appreciated. “I never thought the prospect of eating dirt would be a draw,” one juror said. “But for this audience, a multisensory approach was spot on and clearly delivered amazing results.”

Kroeker hoped to lure 1,500 visitors to the space and tempt them to stay for four minutes each. Instead, 1,732 attendees camped out for an average of 4.5 minutes. In addition, he wanted to generate awareness with 30,000 attendees passing by in the aisles (those who may or may not have entered the stand). Based on the show’s tracking methodology, 31,920 visitors ambled by the firm’s booth.

Social-media results were also through the roof. Marketers sent one prescheduled tweet per hour throughout the show, and K-Tec scored an average of 718 impressions per tweet. Considering that the four-day show was open for eight hours per day (a total of 32 hours), that’s 22,976 impressions for tweets alone.

In addition, Kroeker hoped to score 200 top-quality leads; however, the team actually identified 253. More importantly, one of those contacts – a key buyer from Turkmenistan that wasn’t in K-Tec’s database prior to the show – purchased 10 pieces of equipment shortly after the event. This one important sale more than paid for K-Tec’s entire investment.

Compared to posh promotions such as multimedia extravaganzas, big-ticket drawings, and celebrity appearances, K-Tec’s traffic-building and social-media initiatives might have been small potatoes. But like a mosquito inside a tent, the company’s minute maneuvers made an impact far beyond their size and created a buzz that got both attendees and Sizzle Awards judges talking.

TRAFFIC BUILDER
Exhibitor: K-Tec Earthmovers Inc.
Creative/Production: K-Tec Earthmovers Inc., Rosenort, MB, Canada, 204-209-0375, www.ktec.com
Show: ConExpo-Con/Agg, 2020
Promotional Budget: Less than $49,000
Goals:
Lure at least 1,500 visitors to the booth for an average of four minutes.
Boost awareness and traffic through clever social-media posts.
Rank in the top 10 for page views on the show’s website.
Score 200 top-quality leads and a significant return on investment.
Results:
Attracted 1,732 attendees to the space for 4.5 minutes on average.
Posted at-show tweets once every hour and averaged 718 impressions for each.
Placed 10th out of 2,257 exhibitors in terms of page views.
Collected 253 qualified leads, one of which led to the sale of 10 pieces of equipment, enough to pay for K-Tec’s entire show expenditure.