Little Off The Top 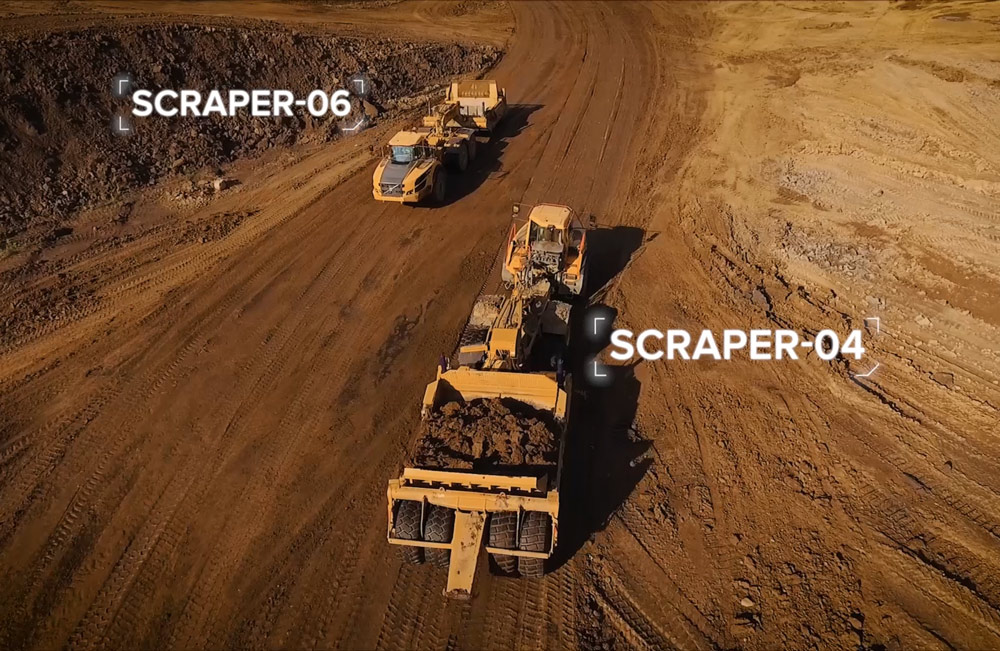 Little Off the Top

Simply put, while graders move soil, scrapers re-move it. Whether self-propelled, attached to tractors, or dragged behind other heavy equipment, scrapers can be applied to many different applications.

Towed scrapers tend to be less expensive, versatile, and productive. In highway and other construction applications, scrapers are used for moving soil over long distances (up to 2 miles).
It consists of a wheeled, open-topped wagon with an open front gate having a bladed bottom edge. As it moves or is pulled forward, it forces the blade through the soil at the preset operational depth (which depends on the distance of the pass, type of soils, etc.) which in turn forces the soil up and over the blade into the empty wagon. After the wagon is filled, the gate is closed and its load of cut soil is taken to a designated spot for dumping or stockpiling. Given its capacity, productivity, and ability to work effectively over long linear distances, the scraper is a primary road building tool.
Drawn scrapers can be configured to provide sole compaction as well as excavation through the use of multiple tires and heavyweight loads. This allows the scraper to serve a duo function, compacting the excavated soil at the stockpile or disposal area. As it can cut consisted thicknesses of soil it can also place soil in consistent lift thickness in preparation for subsequent compaction.
In this way, scrapers are used for both cut and fill operations. The overall operating cost savings can be substantial.

Pull-pan ejector scrapers provide three important functions of self-loading material in the cut zone, transporting the material on the haul road, and finely spreading the material out in the fill area—all in one machine. These requirements make pull pan ejector scrapers the right choice for bulk earthwork operations associated with roadway building, clearing and grubbing, and site development. Other equipment, such as bulldozers and graders, can scrape away soil and grade surfaces, but only scrapers can also remove and transport bulk quantities of soil in one movement.

Given their size and power, scrapers are considered useful for work in heavier and harder soils. Other equipment may require dry soil conditions for high productivity, but scrapers can work in wet soil and even muck. This eliminates the need for more specialized equipment, up to three separate machines, reducing a fleet operator’s ownership costs. The result is an overall 30% reduction in fuel consumption and associated maintenance and operating costs. Optimum operating conditions include haul distances under 2,500 feet, soil densities of less than 3,000 pounds per cubic yard, and no large objects (broken concrete, boulders, tree stumps, etc.). They can also operate over soft grounds allowing it to work in soft foundation conditions.

Efficiency, Productivity, and Control
Efficiency is the key to making money as an earthwork contractor. Time is money, and the more earth that can be moved in a given period translates into higher profits. Greater individual efficiency translates into needing fewer such pieces of equipment on a given job site. Less equipment means fewer headaches and queuing delays by the equipment fleet—an important, if indirect, source of further cost savings.

Scraper productivity is a function of many factors, both local conditions and equipment operating characteristics. Equipment characteristics include gross operating weight (weight of the machine plus the weight of its soil load), soil storage capacity, gate width, engine horsepower, gear used during the operation, operating speed, etc. Operating characteristics include effective grade (also referred to as total resistance) and Rimpull. Effective grade is the sum of both the slope grade and the rolling resistance. Rimpull is the force measured in pounds between the tire and the ground resulting from traction and surface friction.
The distance traveled from the area of excavation to the point of disposal combined with the operating speed, and the time to fully load the grader (loading and maneuvering time), gives the machine’s total cycle time. Taking its full capacity and dividing it by the total cycle times (modified by an efficiency factor affected by operator experience, weather conditions, visibility, etc.) gives the machine’s total productivity per hour or workday.

Operating cabs can be equipped with additional advanced control systems. These can include exterior cameras, especially rearward cameras to assist in safe backing up, LED light on the dashboard for low light operating conditions (dusk, dusk, even working under the lights at night), service lights that aid in engine and drive train maintenance, and GPS guidance systems to ensure near perfection in alignment, grade, and elevation of the finished soil surface.

Major Suppliers – K-Tec Earthmovers
K-Tec offers contractors the largest construction pull-pan scrapers in the market with durable scrapers ranging from 28 to 63 cubic yards. Fleets of K-Tec’s high-capacity scrapers are prevalent in the heavy construction market and are frequently spotted on site clearing and road-building projects around the world. The construction-grade K-Tec scraper performs in almost any condition from rock quarries to the muddiest, softest soil conditions in North America, to the sands of Australia and Saudi Arabia.
Using K-Tec scrapers, primary scraper functions can be provided by a single operator, with a single-engine to keep idle time, labor, and fuel costs at a minimum. K-Tec revolutionized the scraper market by releasing the first-ever ADT Scraper concept. K-Tec was the pioneer to develop the technology of hooking up an articulated dump truck to pull a scraper. It is a massive advantage for a contractor to be able to use an existing fleet of ADTs and convert them into efficient, self-loading scraper haulers. Not only can the trucks be utilized for a new purpose, but also that same truck driver can now easily transition into an effective scraper operator, behind the same familiar wheel to add efficiency and productivity to the project.

However, since its inception in 2000, the K-Tec scraper has been designed as a technologically advanced machine. K-Tec has spent years of research and development in refining the optimal earthmoving scraper and leading the industry in revolutionary product technologies. In pioneering pull-pan scraper telematics, K-Tec is continuing the trend of making scrapers “smarter” and more intuitive for earthmoving operations.

K-Tec Scraper Telematics provides benefits across the various levels of an earthmoving operation. It starts with scraper operators receiving real-time feedback on optimizing load count productivity and payload capacities on their in-cab display screen. Service technicians will also benefit from K-Tec Scraper Telematics, as they can easily receive mobile message notifications when maintenance tasks are due, or if system fault codes are reported for troubleshooting. The reminder alerts will pop-up to have them confirm completion on the scheduled intervals that the operator/service mechanic is supposed to perform a task. Examples range from greasing, to tire pressure, and cutting-edge checks, ensuring maximum performance of the machine. Site supervisors may view job site cycle time and load time performance, with average hauling speed and distances on a tablet in the comfort of their pickup truck as a benefit to ensure a smooth and productive operation. Finally, business owners can benefit by calculating their cost of moving material from their office, while protecting their investment with anti-theft GPS tracking on scrapers across various job sites using K-Tec Scraper Telematics.