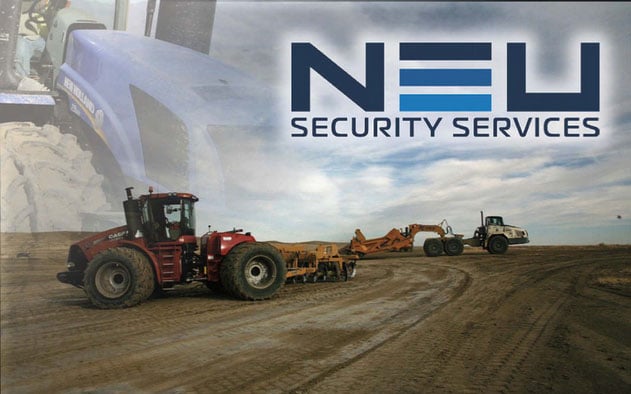 It’s not often that you send out rental equipment to a previously active weapons range.  “We got the call from NEU Security Services that they were looking for a full package of equipment for a year-plus project,” said Bruce Stetler, Rental Account Manager for Titan Rentals, Colorado Springs.  “Once we started digging into the details, we realized that this would be a little outside the ordinary scope of what you run into on a typical dirt-moving project.”

Based out of Austin, TX, NEU Security Services specializes in projects at defense sites and federal buildings around the country.  The project at Range 111 at Fort Carson was more earthwork than what they typically run into on most of their projects.  The scope of the project consisted of major upgrades to the facility including installation of new target pads, building roads and electrical/digital infrastructure, upgrading firing positions, adding new parking lots and administration buildings and a new control tower.

“This is one of the first times that our company has taken on a job that involved this much earth moving,” said Hank Hasenbalg, Superintendent for NEU.  “From a standpoint of equipment, we just aren’t set-up to do this kind of earthmoving work so we knew we would have to rent almost all the equipment.  To start out I had a hard time locating the heavy equipment we’d need for the job locally.  That’s when I called Bruce at Titan Rentals.  I’ve known Bruce for years and he assured me that Titan Rentals would be able to source the equipment from their regional fleet.”

As Bruce explains, there’s a lot more to this project than just sourcing the equipment.  “The equipment was actually pretty easy.  We just pulled whatever we didn’t have on the ground at Colorado Springs from surrounding Titan Rental Stores.  But it does get to be a little tricky in getting access to the range for the people we need to support the project.  You have truck drivers and technicians that have to be cleared and go through training just to be able to access the jobsite.  And you have to trust that you are sending people out there that are committed to following the rules of the installation.  They are extremely serious about not picking up anything that’s laying around – we want to avoid any issues with installation security or the Corp of Engineers that is managing the project.”

“Safety is the top priority for all parties involved in this project,” agreed Hank.  “The rule of thumb out here is “if you didn’t drop it, don’t pick it up,” and they are absolutely serious about that.”  It’s easy to see why – Hank’s team has run across all sorts of ordnance so far on the project.  “We’ve seen some bazooka rounds that date back from World War II.  Most of what we find are empty 223, 30-cal and 50-cal rounds or spent bullets.  But we don’t pick any of it up.  Right now we’ve been working on the firing line area of the range so we’re not as likely to run into unspent artillery rounds.  But as we move downrange and start working on the impact areas, we’re going to run into more of the artillery and tank rounds.  That’s what make you appreciate the work the UXO Contractor is doing for us out here.”

NEU is working with the Army Corp of Engineers and their UXO contractor (PIKA) on the project.  PIKA works ahead of the NEU crews and uses detectors to scan for any ordnance to a depth of three feet.  Anything that is found that could be an unspent artillery or mortar round is flagged, identified and is either removed or blown-up “in-place” using explosives.  NEU only works in areas that have been cleared.

“I have a lot of respect for the work PIKA does on this kind of a project,” said Hank.  “They are real professionals doing a demanding job.  We’ve been cleared-out a number of times already while they identify and dispose of ordnance that they’ve uncovered as they scan ahead of our crews.  Without their diligent work, there is no way we could be out here putting our crews and equipment at risk.  They have a protocol that ensures that the areas that we work in are clear of any potential hazards and all our guys feel safe while they are working on the project.”

NEU’s crews excavate no more than two feet at a time before PIKA comes back in and does another scan.  “The protocol is that they can scan to a depth of three feet and we dig no more than two feet before we have the PIKA team do another scan,” said Hank.  “Anytime we have to go deeper on a cut or trench we do another scan.  The stuff that you can run into out here is powerful enough that you can’t afford to take any chances.  There’s no room for errors – safety is our #1 priority.”

With thousands of yards of material to move and miles of trenches to excavate, having a fleet of equipment that’s dependable and efficient to run is critical to the success of the project.  “We have about a year left on this project and we don’t have a lot of time for equipment issues,” said Hank.  “We know we’re going to be in situations out here where we can’t run because of a hazard that PIKA crew finds.  So when we can go, we want to be moving dirt.  I’ve been very pleased with the condition of the equipment that has been delivered to our jobsite.  And the service has been great once the machines are on the job.”

NEU currently has a pair of Terex 40-ton haul trucks pulling 37 cubic yard K-Tec scrapers doing the bulk of the cut and backfill work on the project.  “This is the first time I’ve used a haul truck/scraper rig for moving fill,” said Hank.  “I’ve got to say that it’s been working really well.  The advantages over running a straight haul truck makes it an attractive way to cut and fill.  They self-load and a good operator can manage the spoil without needing a dozer to level the dump area.  You can move a lot of material in a day with these rigs.”

In addition to the haul trucks and scrapers, NEU is running another half-dozen Titan Rentals units on the project.  “We’ve got about 10 machines out on the jobsite now with more to come as NEU ramps up,” said Gary Young, Store Manager for Titan Machinery – Colorado Springs.  “From skid steers to a tractor pulling a construction disk to a water truck and a dozer, we’ve been able to cover 90% of NEU’s rental needs.  It’s a good project to be on.  All the equipment is well cared-for.  Safety is the top priority.  Everything is being operated within safe parameters and we’re called out if we’ve got any leaks or anything else going on with the equipment out of the ordinary.  We’ve been able to keep the equipment in top form – which is exactly the way we like it.”

“The guys at Titan have been great to work with on the equipment,” said Hank.  “We can be pretty demanding on the condition of the equipment.  It’s a sensitive jobsite.  We can’t have any leaks or anything that’s not 100% up-to-spec on this jobsite.  I was happy to see the equipment as it was coming out was in great shape.  And anything that’s come up since we’ve had the equipment working out here has been handled immediately by the service department at Titan.  Titan has really been “on-the-ball” for the equipment, which has helped us to concentrate on getting on with the job.”

There are lots of distractions at the range so it’s important that the equipment isn’t one of them.  “The military is still conducting live-fire exercises on adjacent ranges while we’re doing our work,” said Hank.  “From where we are working you can actually watch tanks maneuver and fire live rounds at targets down the range.  You can feel the impact of some of that ordnance when it goes off.  It’s really cool to see but it can certainly be a distraction.”

The work will continue through April of 2015.  NEU is doing all the earthwork and trenching and utilities and putting a concrete crew together for some of the foundation and flat-work.  “We have a crew of about 15 employees currently working at the range but we’re looking to add some more operators as we get into the meat of the construction season,” said Hank.  “As we ramp up we’ll be adding more equipment.  We’ll be sourcing the additional equipment from Titan Rentals.  They’ve been a real dependable partner on this project and we’re happy to be working with their equipment.  This kind of project can be a real challenge – we’re happy that the equipment hasn’t been an issue.  It’s one variable that we don’t have to worry about out here.”