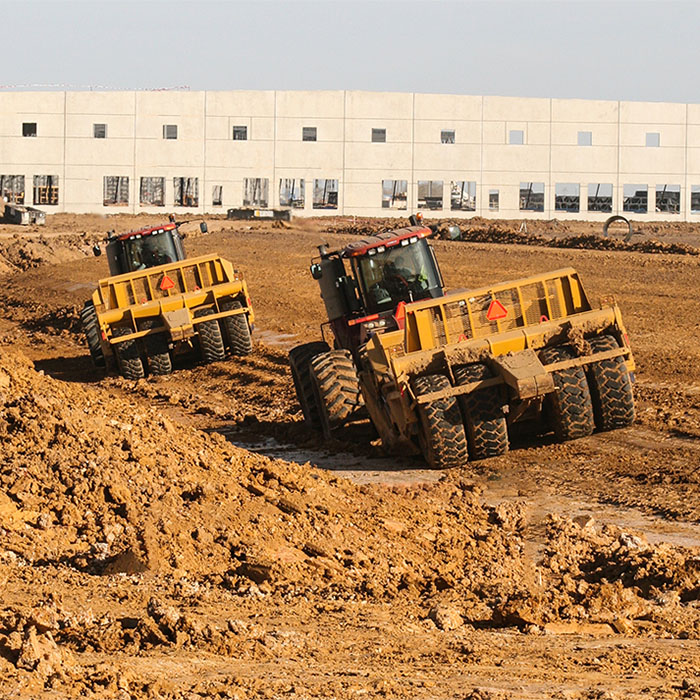 Though it conjures up images of a small, home-based task, the phrase “the right tool for the right job,” is equally relevant in large construction projects. Failure to employ the right equipment or technology can impact production, timelines, and ultimately, a company’s bottom line. Faced with the need to move nearly two million cubic yards of dirt at a jobsite just outside of Houston, a pair of contractors considered the different technologies available to them and ultimately brought to bear an armada of K-Tec 1233 scrapers pulled by Case 580 tractors. Despite some Texas-sized weather delays resulting in horrid ground conditions, they completed the job on time and without issue. The right job, the right tools, and definitely the right results.

One for the Record Books
When complete, the land clearing/earthmoving project referenced above will serve as home to the North American headquarters of global air conditioning supplier Daikin Industries, Ltd. With a footprint of 4.1 million square feet, and consisting of nearly two miles of tilt-wall panels, the building will be the world’s largest tilt-wall structure. It will also instantly become the second largest structure (in terms of square footage) of any kind in the world, second only to the Everett, Wash., Boeing 747 assembly plant at 4.3 million sq. ft. Headed up by general contractor Harvey Builders, the earthmoving facet of the job is being handled by Burnside Services Inc. (BSI, Navasota, Tex.) and Choctaw Construction Services (Katy, Tex.). According to Dave Mueller, BSI project superintendent, the Daikin job is impressive by anyone’s standards.“The total jobsite area is 500 acres, roughly the size of 400 football fields,” he said. “That puts it in a category by itself and forces a company to think hard about how to approach it. While we have projects in which we use offroad dumps to haul dirt, those tend to be relatively smaller volume operations. For larger projects we tend to call on scrapers for earthmoving — and, at two million yards, this is definitely one of those projects.”That penchant for relying upon scrapers was also expressed by Chase Baker, co-owner of Choctaw Construction who is acting as a subcontractor to BSI on the project.

“We have always felt that pans are a lot more efficient than off road trucks,” he said. “For us, it all comes down to production, and we find the scrapers to be a lot more efficient in maximizing That important ‘yards per day’ benchmark. “At the Daikin site, depending on the length of the haul, each 33 cu. yd. capacity scraper was moving between 1,500 and 2,500 yards per day — that was outstanding.”

be relatively smaller volume operations. For larger projects we tend to call on scrapers for earthmoving — and, at two million yards, this is definitely one of those projects.”

The Case for Scrapers
Both Mueller and Baker cited a virtual litany of reasons why the scrapers excelled on the Daikin project. At the center of both of their arguments, however, was a dramatic uptick in productivity.

“With a scraper, you don’t need an excavator, they pick up their own loads,” said Mueller. “If we were loading haul trucks, we’d have to stop the equipment to get the load. By comparison, these machines never stop; they are continuously moving. And we don’t have to have a dozer available to level the load after it’s been dumped. The scraper did all that — and more — at the Daikin site.”

BSI and Choctaw worked through the Bismarck, No. Dak., branch of Titan Machinery and Hlavinka Equipment in East Bernard, Tex., to put their respective fleets together. Both dealers, they say, have provided excellent support — key, given the demands of the job. Earthmoving at the Hockley, Tex., site started in February of 2015 and was quickly followed by one of the wettest 12-month periods to hit the Houston area in some time, making soil conditions horrid for anyone ill-equipped to deal with it.

“We are fortunate to have chosen scrapers which, by design, are better at dealing with bad conditions than off road dumps,” said Baker. “And, because we use K-Tec scrapers, which have a higher ground clearance than any other pan available today, we were able to work through much of that weather. In fact, the difference was actually proven out for us at one point when we had some other manufacturers out to demo their scrapers. Because of the lack of ground clearance on their machines, they were not able to cope with the soil and just bottomed out. We knew we’d made the right decision in going with the K-Tec pans.”

Top-Loads Too
While scrapers thrive in an environment in which they operate alone and essentially do it all, it’s important to note that the K-Tec pans can also be efficiently top-loaded. When a demand for a specialized soil mixture arose, said Mueller, that advantage came into play.

“Because of a need for the select fill, we used the scrapers to remove four-feet of overburden down to the clay layer,” he said. “We hauled that material back to an area where it was mixed with soil pulled from a future truck parking area, as well as from ditches, retention ponds, etc. We then top-loaded the scrapers and used them to build up the building pads to designed grade which, on the south side, called for about ten feet of fill. From early February until September, we built that up in one-foot lifts to allow for testing.”

The design of the K-Tec’s scraper made BSI’s top-loading effort fast and easy.  With the unit’s rack tilted back, the target area is the same size as that of a 40-ton articulated dump. But, because it is positioned lower, it actually makes for easier top-loading than into an ADT.

“That part of the project was sizable and demanding and could have been a nightmare but, because of the versatility of the K-Tec units it went very smoothly,” added Mueller.

Help From Above
Conspicuously absent throughout the Daikin site is evidence of any grading stakes — impressive given the overall amount of earthmoving taking place (BSI’s workload alone involves 20 million sq. ft. of rough grading). According to Baker, all major earthmoving and grading is being done with the use of GNSS machinery and equipment — including machine control-equipped scrapers.

“We and BSI both have a number of our K-Tec 1233 units equipped with Topcon 3D-MC2 machine control systems which allows us to streamline much of the bulk earthmoving,” he said. “Those operators can simply look at the screen in their cab and know, at all times, what the elevation is at that point on the jobsite. There is no constant referencing of nearby blue-tops, no grade stakes getting knocked over, no calling surveyors in to re-shoot an area.”

To accommodate the units that don’t have GPS, Choctaw and BSI use one GPS machine — either a scraper or a dozer — as a lead unit and have others follow his lead. “That’s really allowed us to improve efficiency in areas that would traditionally be survey heavy,” added Baker.

Made the Difference
For BSI and Choctaw, using scrapers on the Daikin project was about far more than just an ability to outperform comparably-sized offroad dumps. For Choctaw’s Baker, the bottom line is, literally The Bottom Line.

“Mind you, there is a case to be made for offroad dumps,” he said. “When you get into a situation where the haul is really long — for us, generally anything over 5,000 feet — trucks tend to do better because of a higher ground speed. However, on this job, we definitely know the pans have made a major difference in keeping us on track and profitable, particularly in light of the conditions we’ve had to deal with. Both of our companies have sizeable projects coming up after this one and we know the K-Tec scrapers will again feature prominently in each of them.”

The Daikin facility is slated for a partial opening in early 2016.