Scratching the Surface of Scrapers 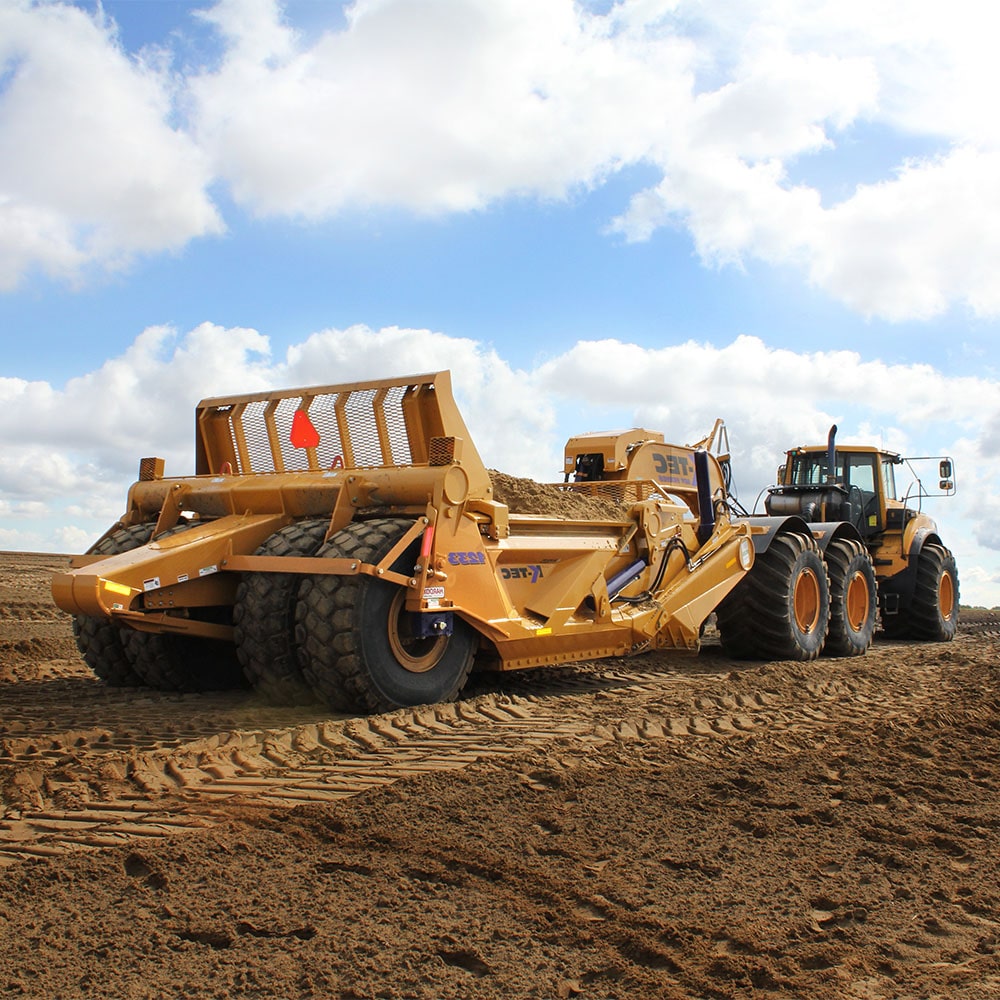 Scratching the Surface
of Scrapers

Everyone knows that scrapers provide an economical method for moving dirt, but because every job is different, choosing the right scraper can be complicated. However, in order to be more competitive in bidding jobs and more efficient on the job site, contractors need to understand the benefits of each scraper in different applications.

Considerations in the decision-making process include the following:

The last two variables in particular can influence the choice of equipment “partners” for maximum productivity. As Shane Kroeker, marketing manager for K-Tec Earthmovers Inc., says, “Efficient pairing of equipment is providing advantages for a wide variety of construction projects.”

He suggests articulated dump trucks for an advantageous return on investment and increased profitability because of their speed and the self-loading option. In addition, an ADT/scraper package typically costs less than the purchase price of a traditional self-propelled scraper.

Since the partnership fostered in July 2013 with Volvo CE, K-Tec has promoted use of a Volvo ADT with a K-Tec ADT scraper. The ADT/scraper pairing provides a more fuel-efficient solution. “Traditional self-propelled scrapers typically weigh more,” Kroeker states. That causes more issues in wet job site conditions, when compared with other earthmoving equipment.

Kroeker cites such applications as airport runway expansions, road building, cattle feed lots, and retention ponds that benefit from ADT/scraper pairings. Contractors can top-load material because the target opening, while similar in size to an ADT, is lower to the ground-an advantage for the excavator operator. Contractors can convert their ADT to pull a scraper by removing the box. Flexibility saves money because contractors can use their ADTs to pull a scraper, without the need to purchase additional machinery.

“It comes down to using the correct piece of machinery for the job,” Kroeker notes. “Rock trucks excel at hauling rock, while scrapers are the most efficient option when moving dirt.

The ADT/scraper combination is an obvious upgrade over the ADT/excavator earthmoving setup, Kroeker says, because contractors can get the job done more efficiently, with less machinery. “This means that not only will the upfront investment be less, but the variable costs of labor, fuel, and maintenance will all be significantly less” than the typical earthmoving setup consisting of one excavator, two ADTs and a dozer, plus the manpower to run all the machines. The use of an ADT as a scraper power unit allows the contractor to maintain a fast speed, with a self-loading option. “When you consider that an ADT/scraper can self-load in as little time as 60 seconds, while an ADT top-loaded with an excavator can easily take up to 120 seconds, the productivity is astounding.”

Sizing Up the Equipment
To maximize efficiency, it’s imperative to match a power unit’s horsepower with the size of the scraper being pulled.

K-Tec’s Goossen lists some of their popular pairs. The 1237 ADT offers self-loading, pull-pan versatility. The most popular model in their fleet, it is a multipurpose machine capable of tackling any soil condition with loading speed and fuel efficiency. You don’t need a dozer to load it, he says, just a 40-ton truck to pull it. “It travels faster than a traditional scraper with an ag tractor,” he says.

Some K-Tec scraper models are also suited for urban sites, where maneuverability and width restrictions challenge other equipment.

Known as the world’s largest dirt-moving scraper, the 1263,  is push-loaded. Designed to be pulled by a 40-ton, 450-plus horsepower rock truck, it is a “mass dirt hauler,” Goossen describes, capable of hauling more than a million cubic yards for minimal distances at speeds up to 30 mph, loaded.

According to Goossen, a single K-Tec scraper out-performs a set of 17-21 yard trains, which weigh more in steel alone. “A single scraper loads faster, cycles faster, and has better fuel efficiency. It’s easier on the tractor if you never pulled trains.”

Capable of self-loading in many situations, the K-Tec scraper requires less support equipment, and, consequently, fewer personnel. As of 2014, all their scrapers are brake-compatible, with a patent-pending antilock brake system featuring patent-pending calipers. “The amount of brake force correlates to the weight in the scraper,” Goossen elaborates. This meets OSHA safety regulations.

Beyond Limitations
Confessing that “there’s always a place for a construction or ag tractor to pull a scraper,” and that “under a half-mile, it’s difficult to beat an ag tractor and scraper,” Goossen says an ag tractor has limitations. Some contractors don’t want to bring them to job sites.

“A self-propelled scraper has only one use; the market is limited,” he explains. “The market shifted to a rock truck and excavator due to Cat’s dominance, but it’s cheaper to move dirt with a scraper.”

A rock truck is not self-supportive, he explains, but the option to attach an ADT to a rock truck for speed aids in a competitive industry. “The flexibility of being able to use a rock truck is enormous,” Goossen states. It allows a contractor to use a standard construction power unit to pull a scraper, and enables him to maintain transport speed while hauling more material.

More flexibility may be in store. Goossen, who says K-Tec has been “focused on building the best scraper money can buy” since the company was founded in 2001, discloses that a design team is actively working on multiple new innovations with staged implementation over the foreseeable future. “We are not only focusing on the next year, but have the concepts for new technology that will be implemented over a 10- to 15-year window,” he notes. “The technology is there.”

Pulling Productivity
Some technology is already here. The I-220TS4 ejector scraper from Ashland Industries had its debut at Con Expo. Ashland, established in 1953, is now affiliated with Case I-H.

Will Davis, North American sales manager, calls the I-220TS4 a “modified and improved version of the I-180TS2 that improves on the 20-yard [scraper] from three years ago.” Compatible with high-horsepower rubber-tracked or wheeled tractors, it is a new design in the 22-yard forced ejection scraper category, he reports. The advantage it has over dump-style scrapers is that it cleans the bowl completely. “When you get 30% moisture in the spring, you have heavy, wet material that collects in the corners [of a dump-style scraper].”

“Scrapers are often the first piece of equipment onsite-and in the worst areas,” Davis continues. Where the soil is spongy and the ground is rutted, they have to drain the water before work can begin. “This doesn’t pump the soil so bad; it floats over the top. We can go in sooner and open [a site] before a conventional scraper. If we get an inch of rain today, we can go in tomorrow.”

That can make a big difference on a job with a tight deadline. Further assisting time limitations, it cycles more quickly, thanks in part to its 10.5-foot cut that equals gained yardage in the apron. “If you gain an extra tow or three loads per hour, you gain 16 to 20 by the end of an eight-hour day. That’s a big savings.”

Some of the savings can be attributed to the fact that the scraper can be pulled by a 200-horsepower tractor. “Productivity goes up when you pair an ag tractor with a scraper,” Davis says, “because you can load faster. It can load by itself; you don’t need a dozer to fill the scraper.” He compares that pairing with a tandem scraper pulled by a 400-horsepower ADT: “Productivity decreases.”

In mining, Davis explains, “they’re paid by the load, so they go fast. It’s tough on a scraper. The accumulator takes some of the shock, but there’s a lot of stress on rough terrain.” As tractor horsepower has increased, Ashland has built tougher scrapers, adding more strength. “It’s a big step from the old model. More horsepower, more torque rise, higher pressure-all add stress.”

Another advantage of using a tractor is its versatility. “You can unhook it and use it with other equipment,” Davis says. “We make an adaptor to turn the hitch to use different implements.”

Towed scrapers are also easier to transport than the self-powered alternative, Davis notes. “You can put two scrapers on a tractor without being over width, so you don’t need an escort or a permit.” It’s a benefit on roads with weight limits and on narrow bridges. It also helps keep a fleet mobile. “Typically, you’re onsite a week to 10 days before you go to the next project.”

Ashland’s 15 models range from 9.5 to 22 yards, plus a 2.5-yard model that fits on the front of a skid-steer. While the smaller unit is used by landscape contractors around housing, government trails, and feedlots, the bigger scrapers are commonly used in road building and site prep. Davis lists jobs that include shopping malls, a Toyota plant, the Harley Davidson plant in Kansas City, golf courses, and airports.

The light ground pressure produced by Ashland scrapers is an advantage when working in loose or sandy soil. “We do a lot of levee systems and landfills,” Davis indicates. “We keep the psi down around 5 to 8 pounds per square inch because of compaction or to distribute the remaining soil there.”

Managing Efficiency
The beauty of the tractor and pull scraper system is that it’s well suited for a wide variety of applications, thanks to its flexibility. In addition to site prep for residential and commercial building sites, the combo is adept at pond and levee construction, heavy highway construction, and precision land leveling (when combined with a grade control system). David Wilson, product marketing manager, scraper systems, John Deere Construction & Forestry, says that “many users have found this system to be an economical way to construct new landfill cells and move cover material in municipal waste management.”

Deere’s Wilson and Bayless evaluate the efficiency of the system as it’s related to the cost to move a cubic yard of material. Broken down into a couple different areas, the first consideration is the initial investment. “The purchase price of a towed scraper system will be 30% to 40% of an equivalent capacity, self-propelled scraper that will more than likely include two twin-engine scrapers,” Wilson notes.

The second factor is the labor involved with moving that material. The towed scraper system uses one operator, while the self-propelled system will use a minimum of two. If the two scrapers are single-engine units, the labor requirement jumps to three because of the need to have a dozer operator push-load the scrapers.