Taking the Lag out of Lagoon 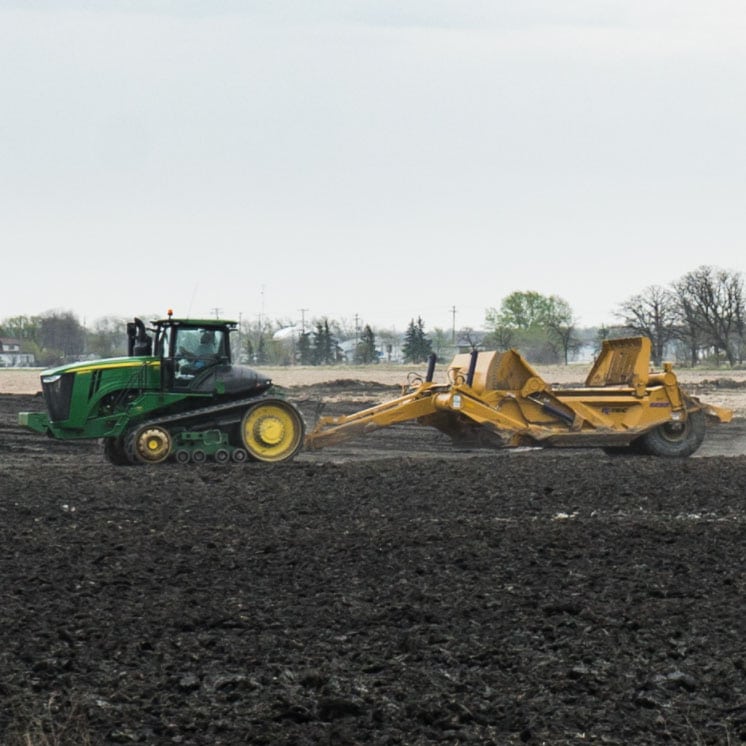 Taking the “Lag” out of
Lagoon Construction

Shifting Perspective on a Solid Foundation
A contracting company sitting atop Stony Mountain, Manitoba, Canada named Earth Max Construction is gaining ground in a niche earthmoving market. Initially moving dirt with an excavator toploading into a 40 Ton Articulated Dump Truck, Earth Max has shifted their methods in selecting equipment with enhanced productivity. Earth Max Construction Project Manager, Randal Dueck explains, “We bought our first scraper about 6 years ago. It was a used K-Tec scraper and it has worked fantastic for us. We liked it so much that we decided to buy a few more, and we just love them.” This smart business decision for Earth Max of easing into scraper equipment allowed them to realize the advantages in efficiency, and later purchased two new K-Tec 1233 scrapers. Each of these scrapers holds a 33 cubic yard heaped capacity, allowing for impressive production results for their business. Dueck compared the way that their operations have changed since using scrapers, “With the scrapers versus hauling with a rock truck, we get to go in a lot wetter conditions. We don’t rut up the clay nearly as much, so we can haul a lot more clay without making a mess. The efficiency is also a lot higher, as we only have one machine running versus two on an excavator load, so it works fantastic that way.” Contractors need to take advantage of effectively operating in less than ideal conditions when working in the sticky gumbo clay of the Red River Valley, with unexpected torrential rains.

Lagoon Life
In 2017, Earth Max Construction efficiently provided earthworks for a pair of lagoon projects they were awarded in rural southern Manitoba, Canada.
Lagoons are pond-like bodies of water dug-out of the earth, that are constructed to receive, hold, and treat wastewater for a predetermined time period.
Located in the RM of Morris, the Lowe Farm, Manitoba lagoon expansion project required construction of a new secondary lagoon cell providing the required storage capacity to meet future hydraulic yearly loading of 66,000 m3/year and population growth. The new cell has the storage capacity of 31,027 m3, then removal of the existing berm between the existing two lagoon cells was needed to create one new primary lagoon cell.
The cost of the project was split evenly between all three levels of government. “The tender bids though did come in significantly below engineered estimates, so we’re hoping that the project will be able to be completed for somewhat less than the $1.5 million. The work for dirt moving came in considerably lower than the estimated amount.” Stated Rural Municipality of Morris Reeve, Ralph Groening at the start of the project.
The St. Pierre, Manitoba lagoon project required 150,000 m3 of earthwork, to double their lagoon capacity, which now allows for a capacity of 150 additional homes, or 2,000 residents. This project included construction of a new secondary cell and a new wetland cell. Earthwork activities comprised of topsoil stripping, stockpiling, excavation, embankment and dyke removal. Earth Max Construction started the St. Pierre lagoon project in May 2017, and completed in July 2017. More rain amounts were encountered on the St. Pierre lagoon project; however, with the excellent floatation on the scrapers, they were still able to work on most days. Village of St. Pierre Mayor Mona Fallis says what this lagoon expansion means for their community: “We’ve been on a development freeze going on 5 years, so there has been very limited new construction in the community. The lagoon expansion allows us to approve and expand new developments, and subdivisions. Commercial construction can now move ahead, so this is a huge benefit for our community.”

Ahead of Schedule
RM of Morris Reeve, Ralph Groening states: “We did some research and discovered that the low bidder for the Lowe Farm lagoon project as well as the second lowest bidder use exclusively scrapers manufactured by K-Tec Earthmovers.” Being ahead of schedule, and coming in under budget on public works projects allows the RM to pass on the savings to citizens. By using the efficient scrapers for the lagoon projects, it provides a win-win for all stakeholders involved.
Besides the capacity efficiency in production attributing to the fast project completion times, Earth Max’s Randal Dueck comments on the serviceability of the scrapers, “The good thing is that there hardly is anything to service on the scrapers. We grease them regularly and they go to work. The guys at the shop look through them once a year and that is it. There’s never anything that breaks on them.” Having only 2 daily grease points on the scrapers makes a difference in productivity, because instead of searching for numerous grease points, more dirt can be moved. K-Tec’s minimal maintenance scraper design encourages earthmoving efficiencies to get ahead of projected schedules.

Bids of Change
Several progressive municipalities are starting to formally enforce the use of efficient machinery on public works projects, as a measure of controlling expenses and costly delays.
Kelly Goossen, Senior VP of Sales for K-Tec Earthmovers, has noticed a trend in recent municipal tendering process. “Lately we have seen tenders go out that have specifically stated that the project must be completed by use of K-Tec pull-pan ejector scrapers. The decision makers are recognizing that our earthmoving machines provide maximum efficiency on their projects, and don’t want to chance using other types of earthmoving equipment.” The only way that contractors will get a chance to even submit a bid on the tender is if they already have K-Tec scrapers in their fleet, or plan to add them once awarded the project. It has been a growth stimulus for K-Tec Earthmovers for these levels of government to understand and recognize efficient equipment, to boost scraper demand in the marketplace. Reeve Ralph Groening concludes that “K-Tec is an amazing company that produce the world’s largest earth scraper. They sell their product all over the world including Saudi Arabia and Australia, and their machines are in demand.”
For more information, please visit www.ktec.com